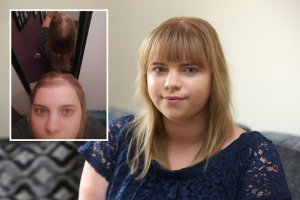 Charlotte came to Perfectfringe to help cover signs she was battling Trichotillomania.  Here is her story:

A mum-of-two who had a condition which led to her pulling out her own hair has spoken out about the horrendous bullying she faced and her low self-esteem in a bid to help others who might have the disorder.

Charlotte Cordall, 27, was diagnosed with Trichotillomania – a disorder where people feel an intense urge to pull their hair out and they experience growing tension until they do.

People with the condition may pull out the hair on their head or in other places, such as their eyebrows or eyelashes.

Mrs Cordall, who is a civil servant, first started pulling her hair out when she was around eight-years-old.

It got worse throughout her teens and at one point she was nearly bald.

However, she has come through the other side and wants to help others now she is one year ‘pull free’.

She said: “I was about eight when it first started and it got so bad that at one point I just had a massive bald patch on top of my head.

“I don’t remember the first time it happened, it is just a blur because people who have the condition don’t tend to even know they are doing it. It usually starts through a trauma and mine started around the time my parents got divorced.

“I would wear hats to school as I got older and be very self conscious about it. It affected everything. I was bullied very badly.

“I was called ‘cancer head’ and a ‘freak’ and my self-esteem had been completely ripped to shreds.”

Mrs Cordall, who is from Arnold, then went on to Derby University where she met her now husband, Jordan.

She said she grew up not knowing what was wrong with her until she watched a programme when she was 16.

She said: “I believed I was a freak. I didn’t know why I was doing it or what was wrong with me. Then I watched Embarrassing Bodies and they did an episode on Trichotillomania.

“I remember just sitting on the floor crying because I realised I wasn’t alone any more.”

She then returned to the doctors were she was given cognitive behavioural therapy, a talking treatment, but it didn’t help.

The condition worsened throughout her two pregnancies until she started having psychotherapy in April 2018.

One year later, she hasn’t pulled out any hair since.

She said: “It feels amazing to not have to worry about my hair when I leave the house. I used to wear hair pieces and hats to cover my head and I was always so self-concious. It was truly debilitating.

“This has completely changed my life. My anxiety used to control me. Since then I have even joined an amateur dramatics group which shows just how far I have come.”

Now, she hopes that speaking out about the condition and how it has affected her will help other people.

She said that if you think you may have the disorder, go straight to your doctor.

She said: “GPs are a lot more informed on it now than when I went to the doctors in the early 2000s. I would also recommend keeping yourself busy, especially your hands. I did a lot of cross stitch which helped.

I think it is important for parents to know how to deal with it as well as it can be hard. I think the main thing is that you shouldn’t try and understand what it is and why it is happening because more often than not that person won’t understand why they are doing it either.

“The most important thing you can do is to just be there for your child.”

She also recommended Facebook groups to talk to other people dealing with the disorder.

Her husband, Jordan, 30, said he was very proud of how far she had come.

He said: “This is a huge achievement and I am so proud of her. She has come on leaps and bounds with her self-confidence.

“I couldn’t be more proud of her. I have been with her for eight years so I have seen the journey she has been on and the fact she now wants to speak out and help others is amazing.”

It is estimated that around 840,000 women in the UK suffer from the hair pulling disorder. It affects eight times as many women as men.

Around two percent of the world’s population may suffer from the condition at some point it their life time.

Reality TV star Sam Faiers and US actress Olivia Munn have both admitted to suffering from the disorder.